If you take a walk around the north Pearl it seems every other block has a “Notice of Public Hearing” sign on a wall or fence. Pretty much all of these represent what’s likely to become a new apartment complex. With the Pearl having one of the lowest vacancy rates in the Portland metro area, it’s no surprise developers are jumping at the chance to build there.

Here’s a few buildings that you should be seeing in the near future. For more on new Portland developments, check out April’s Portland Monthly.

It’s being developed by Bob Ball of Astor Pacific. It’ll have 177 apartments at 6 stories, and 165 parking spots. More information HERE.

Bridge Housing and Ankrom Moisan are behind this new addition to the Pearl. Ankrom Moisan also did The Ramona which will be across the street from The Abigail. It’ll have 142 mixed-income units that include affordable housing. It parks 81 cars and 258 bikes. More information HERE.

Developed by Fore Properties, Las Vegas, and designed by Robert Leeb. These will be built on Front St. along the river and  hold 243 units with 236 parking spots. More information HERE.

This is a taller building, at 26 stories, developer Unico and architect ZGF plan to add 285 apartments to the Pearl. It’ll have 6 live/work units, and one small retail spot. More information HERE.

There’s a lot less information out there for this building, but if it works out it will be going up where Cash and Carry currently is at 1420 NW 14th. Mill Creek Residential will be putting 269 apartments in this 8 story building.

This one has been getting a lot of attention. It’s a 28-30 story condominium being built by Hoyt Street Properties. It’s a thin, tall building holding 168 condos. This has been in the works for a couple of years now, and isn’t official yet. More information HERE.

There’s something about the Pearl District that makes one assume there would be a salad bar on every corner, but that’s just not the case. There’s actually not many at all. But Christopher Handford, the owner of Davis Street Tavern, has come to the rescue. Check out Garden Bar. There’s been a lot of talk about Right 2 Dream Too—a camp for the homeless located on 4th and West Burnside. By now you’ve probably caught pieces, or rumors, about it being moved to the Pearl, so let me take a brief moment to see if I can’t simplify some of this.

Michael Wright owns the land on which R2DT sits. In 2011, after the city-forced closure of his adult book store, Cindy’s Adult Book Store, Wright leased the lot out to R2DT for $1 a year. The city has fined Wright nearly $25,000 for having an unpermitted campsite. Wright in turn sued the city saying his campsite is not recreational and should not be subject to the fines. Wright and the city are still in negotiations—him wanting the fines dropped, the city not wanting to be sued. In a Willamette Week article, Wright said the city told him part of the deal was that he’d never be allowed to have another such camp on any of his properties. He didn’t like the limits imposed by that, so negations continue.

The City of Portland, and largely Amanda Fritz, wanted Right 2 Dream Too moved a long time ago. Fritz originally suggested the camp be moved to a city owned parking lot about a half-mile away, but that didn’t happen.

Recently the city has decided to move the camp to the Pearl District, under the Broadway Bridge. But, the Pearl District Neighborhood Association is now fighting against that, and approved the use of a $10,000 “rainy-day fund” to take legal action against the city if need be, however they admit they would like to avoid such a situation.

The Neighborhood Association president Patricia Gardner said that putting a camp on city property would violate zoning, fire, and public health codes. Gardner told WW, that it isn’t about it being a homeless camp; it’s about the silent process the city is taking. The PDNA sent Fritz this letter last Tuesday.

But wait, there’s more. KATU posted a story yesterday saying that the nonprofit in charge of paying for the R2DT camp may not actually be a nonprofit, which basically mean it’s not going to be easy to get them on city land. R2DT’s blog says they’re a nonprofit, but according to a letter sent last year by the IRS they aren’t.

So as things stand now, the city and Fritz want R2DT at a new, semi-permanent, location. Wright still owes money, and still has a lawsuit against the city. The PDNA hasn’t pressed charges, and have yet to been able to meet with Fritz and discus the situation. And R2DT probably isn’t a nonprofit “legally” speaking, so that’s something they need to get filed with the IRS before the city can find them a new home.

I hope that helps clear a little of this mess up. I’ll keep updates posted on Twitter or Facebook as things continue.

Now in its 28th year, First Thursday in the Pearl is a district-wide celebration that occurs on the first Thursday of each and every month. Originally a gathering of art collectors and dealers, the celebration has grown to a  monthly event of over ten thousand people that includes art enthusiasts, wine aficionados and scenesters looking to see and be seen. When you combine a rich and thriving art scene with some of the best happy hour menus found in Portland, you get an event that has quickly become the place to be each month!

The beginings of First Thursday

The name of Portland’s best known Arts district, The Pearl suggests urban legend. Perhaps an oyster canning factory once sat amidst the aging warehouses, or Chinese seafarers hid pearls beneath cobble stoned Twelfth Street. Whatever the origin, there’s the suggestion of both beauty and ugliness in the name—an elegant gem nestled in a drab, rough shell.

The actual story goes like this: A local gallery owner coined the phrase over 25 years ago to suggest that the buildings in the warehouse district were like crusty oysters, and that the galleries and artists’ lofts within were like pearls. As local business people were looking to label the growing area—the “warehouse district” or the “brewery district” were two suggestions—a travel writer borrowed the phrase and the name stuck.

What you need to know

Art galleries in the district are all open late into the evening for receptions and new show openings. Many of the galleries offer food and drink while the artists showing are available to meet and discuss  their work. The gallery receptions are free and open to the public, and the receptions usually go from around 6pm to 9 or 10pm. Please check each gallery for actual times.

On pleasant evenings, the streets are literally packed with artists selling their creations and musicians and bands playing live music on many of the closed-off streets. This is a celebration!

Parking gets very dificult in the area on First Thursday. Your best bet is to take public transportation to the Pearl, or park nearby and walk into the neighborhood.

Called into work again, but have the kids? Emergency meeting, or simply in need of a couple hours? Well, if you haven’t already heard of WeVillage, you should familiarize yourself. And if you have heard of them, you should know they’re moving—just around the corner—to a new and larger facility.

Opened in 2009, WeVillage is the first and only drop-in childcare facility in downtown Portland. Located in the Pearl at 1024 NW Glisan Street, the new 1800-square-foot building is a beautiful, modern display of engaging colors and play structures designed for children aged 6 weeks to 12 years.

Living as a single mother and independent film producer, WeVilliage creater Karen Beninati, noticed the need for a fun, safe and happy place for children, as well as an easy and stress-free alternative for parents. “The people who live in the Pearl are smart and they want more, especially for their kids,” says Beninati. “The new space we hope will bring back old clients whose kids have grown a little bored of the current space and attract new clients who have never used us before.”

WeVillage is open Monday-Thursday 8am-9:30pm, Friday 8am-11:30pm, and Saturday 10am-11:30pm, and on most public and all school holidays. Hourly rates are $10 for members and $15 dollars for non-members. For more information, visit Experience The Pearl, or check out WeVillage directly. 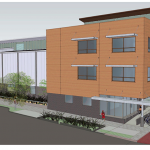 San Francisco based Planet Granite plans to build a full block climbing facility between NW 14th and 15th at Pettygrove and Quimby.  The 30,500 sq ft facility with a 60 ft climbing wall is targeted to open in mid 2014.  The owner, Micky Lloyd, proclaims that it will be the best climbing facility in the country.

There will be walls with hydraulically adjustable angles and crevices of changeable widths.  The gym will also offer yoga, weights, and cross training equipment. Annual membership will run $803.